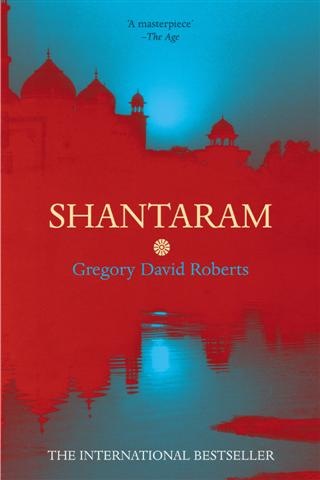 "It took me a long time and most of the world to learn what I know about love and fate and the choices we make, but the heart of it came to me in an instant, while I was chained to a wall and being tortured."

So begins this epic, mesmerizing first novel set in the underworld of contemporary Bombay. Shantaram is narrated by Lin, an escaped convict with a false passport who flees maximum security prison in Australia for the teeming streets of a city where he can disappear.

Accompanied by his guide and faithful friend, Prabaker, the two enter Bombay's hidden society of beggars and gangsters, prostitutes and holy men, soldiers and actors, and Indians and exiles from other countries, who seek in this remarkable place what they cannot find elsewhere.

As a hunted man without a home, family, or identity, Lin searches for love and meaning while running a clinic in one of the city's poorest slums, and serving his apprenticeship in the dark arts of the Bombay mafia. The search leads him to war, prison torture, murder, and a series of enigmatic and bloody betrayals. The keys to unlock the mysteries and intrigues that bind Lin are held by two people. The first is Khader Khan: mafia godfather, criminal-philosopher-saint, and mentor to Lin in the underworld of the Golden City. The second is Karla: elusive, dangerous, and beautiful, whose passions are driven by secrets that torment her and yet give her a terrible power.

Burning slums and five-star hotels, romantic love and prison agonies, criminal wars and Bollywood films, spiritual gurus and mujaheddin guerrillas---this huge novel has the world of human experience in its reach, and a passionate love for India at its heart. Based on the life of the author, it is by any measure the debut of an extraordinary voice in literature.
About the Author
Gregory David Roberts
Gregory David Roberts (born June 1952) is an Australian author best known for his novel Shantaram. He is a former heroin addict and convicted bank robber who escaped from Pentridge Prison in 1980, and fled to India where he lived for ten years.

Roberts had become addicted to heroin after his marriage ended, and he lost custody of his young daughter. In his efforts to finance his drug habit, Roberts became known as the "Building Society Bandit" and the "Gentleman Bandit", because he had chosen to rob only institutions with adequate insurance, he would wear a three-piece suit, and he always said "please" and "thank you" to the people he robbed. Roberts believed at the time that in this way he was lessening the brutality of his acts, but later in his life he admitted that people only gave him money because he had made them afraid. He escaped from Pentridge Prison in 1980.

In 1990, Roberts was captured in Frankfurt after being caught smuggling heroin into the country. He was extradited to Australia and served a further six years in prison, two of which were spent in solitary confinement. According to Roberts, he escaped prison again during that time, but then he relented and smuggled himself back into jail. His intention was to serve the rest of his sentence to give himself the chance to be reunited with his family. During his second stay in Australian prison, Roberts began writing the novel Shantaram. The manuscript was destroyed by prison wardens, twice, while Roberts was writing it.