All Groups Group 1 Group 2 Group 3 Group 4 Group 5
Group 3
Girl, Woman, Other
by Bernardine Evaristo
Teeming with life and crackling with energy — a love song to modern Britain and black womanhood Girl, Woman, Other follows the lives and struggles of twelve very different characters. Mostly women, black and British, they tell the stories of their families, friends and lovers, across the country and through the years. Joyfully polyphonic and vibrantly contemporary, this is a gloriously new kind of history, a novel of our times: celebratory, ever-dynamic and utterly irresistible.
Author:
Bernardine Evaristo
Bernardine Anne Mobolaji Evaristo, OBE FRSL FRSA (born 28 May 1959), is a British author and academic. Her eighth book, the novel, Girl, Woman, Other, won the Booker Prize in 2019, making her the first black woman and the first black British person to win it. In 2020 she won the British Book Awards: Fiction Book of the Year and Author of the Year, as well as the Indie Book Award for Fiction as well as many other awards. The novel was one of Barack Obama's 19 Favorite Books of 2019 and Roxane Gay's Favorite Book of 2019.[2][3][4] In June 2020 she became the first woman of color and the first black British writer to get to number 1 in the UK paperback fiction charts, where she held the top spot for five weeks. There are over 50 foreign language translations of Evaristo's books in process.
Group 1
The Secret History
by Donna Tartt
Under the influence of their charismatic classics professor, a group of clever, eccentric misfits at an elite New England college discover a way of thinking and living that is a world away from the humdrum existence of their contemporaries. But when they go beyond the boundaries of normal morality their lives are changed profoundly and forever, and they discover how hard it can be to truly live and how easy it is to kill.
Author:
Donna Tartt

is an American author of several novels. She won the WH Smith Literary Award for The Little Friend in 2003 and the Pulitzer Prize for The Goldfinch in 2014. She was named to the TIME 100 Most Influential People in 2014. Tartt was born in Greenwood, Mississippi, in the Mississippi Delta, and raised in the nearby town of Grenada.

She enrolled in the University of Mississippi in 1981, and her writing caught the attention of Willie Morris while she was a freshman. Following a recommendation from Morris, Barry Hannah, then an Ole Miss Writer-in-Residence, admitted eighteen-year-old Tartt into his graduate short story course. "She was deeply literary," says Hannah. "Just a rare genius, really. A literary star." Following the suggestion of Morris and others, she transferred to Bennington College in 1982, where she was friends with fellow students Bret Easton Ellis, Jill Eisenstadt, and Jonathan Lethem, and studying classics with Claude Fredericks. She dated Ellis for a while after sharing works in progress, The Secret History and Less Than Zero respectively. 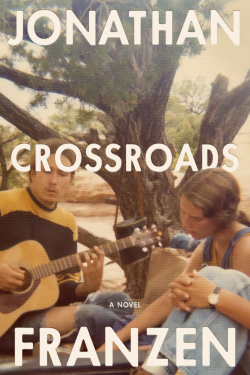 Crossroads
by Jonathan Franzen
was first published on October 5, 2021. It is a family saga set during the 1970s and centers on the Hildebrandt family in the fictional New Prospect Township of suburban Chicago. The novel follows Russ and Marion Hildebrandt, whose marriage is close to collapse, and their four children, Clem, Becky, Perry, and Judson. Each chapter is told from the perspective of one of the Hildebrandts, and most are set in New Prospect .

Author:
Jonathan Franzen
(born August 17, 1959) is an American novelist and essayist. His 2001 novel, The Corrections, a sprawling, satirical family drama, drew widespread critical acclaim, earned Franzen a National Book Award, was a Pulitzer Prize for Fiction finalist, a James Tait Black Memorial Prize and a shortlisting for the International IMPAC Dublin Literary Award. His most recent novel, Freedom (2010), led to a controversialappearance on the cover of Time magazine alongside the headline "Great American Novelist".