Journey to the End of the Night
by Louis-Ferdinand Céline 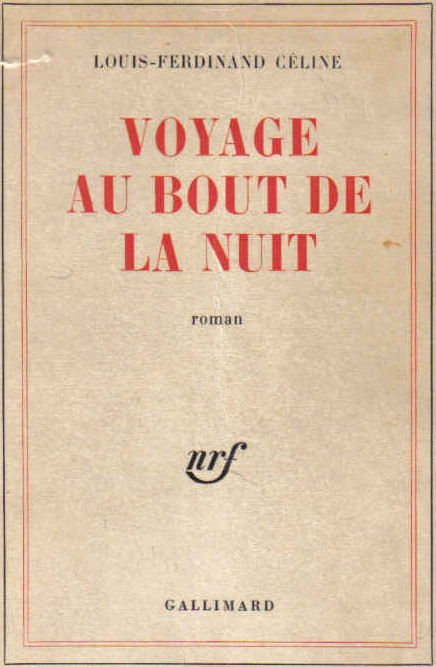 Bardamu is involved with World War I, colonial Africa, and post–World War I America (where he works for the Ford Motor Company), returning in the second half of the work to France, where he becomes a medical doctor and establishes a practice in a poor Paris suburb, the fictional La Garenne-Rancy. The novel also satirizes the medical profession and the vocation of scientific research. The disparate elements of the work are linked together by recurrent encounters with Léon Robinson, a hapless character whose experiences parallel, to some extent, those of Bardamu.

A clue to understanding Celine's Voyage is the trauma he suffered during his experience of the Great War 1914–1918. Celine's experience of the war leads to "…the obsession, the recurrent anguish, the refusal, the delirium, the violence, the pacifism, the anti-Semitic aberration of the 30’s, [and] his philosophy of life …." (From "Foreword" by Frédéric Vitoux of Académie Française in Quinn's The Traumatic Memory.)

About the Author
Louis-Ferdinand Céline

Louis-Ferdinand Céline was the pen name of Louis Ferdinand Auguste Destouches, 27 May 1894 – 1 July 1961. He was a French novelist, pamphleteer and physician. Céline's writings are examples of black comedy, where unfortunate and often terrible things are described humorously. While his writing is often hyper-real and its polemic qualities can often be startling, his main strength lies in his ability to discredit almost everything and yet not lose a sense of enraged humanity. Pessimism pervades Céline's fiction as his characters sense failure, anxiety, nihilism, and inertia.