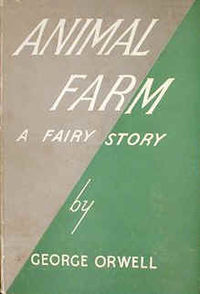 When the old boar on The Manor Farm is dying he summons all the animals for a meeting during which he calls humans parasites and teaches the animals a song called 'Beasts of England'. Subsequently two young boars, Snowball and Napoleon, prepare the animals for a revolution, "All animals are equal" is the final among 7 'Commandments of Animalism'. The animals drive the drunken farmer Jones away.
The pigs elevate themselves to positions of leadership and set milk and apples aside for themselves. Snowball, with varying success, teaches the animals to read and write while Napoleon grows himself a guard of dogs. Jones comes back with a gun and men but the animals put the humans to flight. The heroes of this battle are Snowball and Boxer, the great workhorse.
Political differences between Snowball and Napoleon come to a head when Snowball almost wins a vote on his pet windmill project. Napoleon brings in the dogs who attack Snowball and drive him off. Afterwards, to everyone's astonishment, the windmill is to be built after all. When the animals find the windmill collapsed after a storm, Napoleon and his helper Squealer convince the animals that the absent Snowball has sabotaged their project.
Napoleon has animals killed for alleged collaboration with the infamous Snowball, and 'Beasts of England' is abolished because, in Squealers words, since "the Rebellion is now completed ... Clearly this song has no longer any purpose". When anyone appears dissatisfied, he will cry: "Surely there is no one among you who wants to see Jones come back?"
The animals work very hard on the farm especially Boxer, who has always been too popular for Napoleon's taste. When the big horse finally collapses, the pigs get a van from the abattoir that they say is from a medical clinic. The smart donkey Benjamin reads the lettering on the side of the van when it is already driving off. Boxer tries to smash his way out but he is now too weak.
Years pass, and the pigs start to resemble humans more and more. The Seven Commandments are reduced and altered to a single phrase: "All animals are equal, but some animals are more equal than others".

Animal Farm is an allegorical novel, first published in August 1945. According to Orwell, the book reflects events leading up to the Russian Revolution of 1917 and then on into the Stalin era in the Soviet Union. In his essay "Why I Write" (1946), he wrote that Animal Farm was the first book in which he had tried, with full consciousness of what he was doing, "to fuse political purpose and artistic purpose into one whole". Orwell wrote the book from November 1943 – February 1944, when the wartime alliance with the Soviet Union was at its height. It was initially rejected by a number of British and American publishers.

About the Author
George Orwell
Eric Arthur Blair (25 June 1903 – 21 January 1950), known by his pen name George Orwell, was an English novelist and journalist. His work is marked by clarity, intelligence and wit, awareness of social injustice, opposition to totalitarianism, and belief in democratic socialism.

Considered perhaps the 20th century's best chronicler of English culture, Orwell wrote literary criticism, poetry, fiction and polemical journalism. He is best known for the dystopian novel Nineteen Eighty-Four (1949) and the allegorical novella Animal Farm (1945), which together have sold more copies than any two books by any other 20th-century author. His book Homage to Catalonia (1938), an account of his experiences in the Spanish Civil War, is widely acclaimed, as are his numerous essays on politics, literature, language and culture. In 2008, The Times ranked him second on a list of "The 50 greatest British writers since 1945".

Orwell's work continues to influence popular and political culture, and the term Orwellian — descriptive of totalitarian or authoritarian social practices — has entered the vernacular with several of his neologisms, such as doublethink, thoughtcrime, Big Brother and thought police.

1984
Down and Out in Paris and London