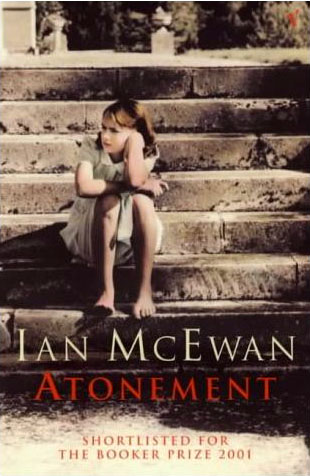 This haunting novel is at once McEwan at his most closely observed and psychologically penetrating, and his most sweeping and expansive. It is in effect two, or even three, books in one, all masterfully crafted.

The first part ushers us into a domestic crisis that becomes a crime story centered around an event that changes the lives of half a dozen people in an upper-middle-class country home on a hot English summer's day in 1935. Young Briony Tallis, a hyperimaginative 13-year-old who sees her older sister, Cecilia, mysteriously involved with their neighbor Robbie Turner, a fellow Cambridge student subsidized by the Tallis family, points a finger at Robbie when her young cousin is assaulted in the grounds that night; on her testimony alone, Robbie is jailed.

The second part of the book moves forward five years to focus on Robbie, now freed and part of the British Army that was cornered and eventually evacuated by a fleet of small boats at Dunkirk during the early days of WWII. This is an astonishingly imagined fresco that bares the full anguish of what Britain in later years came to see as a kind of victory.

In the third part, Briony becomes a nurse amid wonderfully observed scenes of London as the nation mobilizes. No, she doesn't have Robbie as a patient, but she begins to come to terms with what she has done and offers to make amends to him and Cecilia, now together as lovers. In an ironic epilogue that is yet another coup de theatre, McEwan offers Briony as an elderly novelist today, revisiting her past in fact and fancy and contributing a moving windup to the sustained flight of a deeply novelistic imagination.

With each book McEwan ranges wider, and his powers have never been more fully in evidence than here.

About the Author
Ian McEwan
(born 21 June 1948) is a British novelist and screenwriter, and one of Britain's most highly regarded writers. In 2008, The Times named him among their list of "The 50 greatest British writers since 1945".

McEwan began his career writing sparse, Gothic short stories. The Cement Garden (1978) and The Comfort of Strangers (1981) were his first two novels, and earned him the nickname "Ian Macabre". These were followed by three novels of some success in the 1980s and early 1990s. In 1997, he published Enduring Love, which was made into a film. He won the Man Booker Prize with Amsterdam (1998). In 2011, he was awarded the Jerusalem Prize. In 2001, he published Atonement, which was made into an Oscar-winning film. This was followed by Saturday (2003), On Chesil Beach (2007) and Solar (2010).