The Odyssey
by Homer 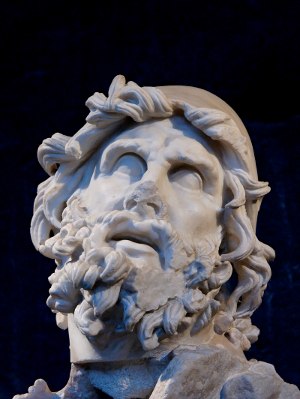 The Odyssey begins ten years after the end of the Trojan War. The hero Odysseus who devised the treachery of the Trojan Horse is missing. His son Telemachus, now a young man, shares his father's house on the island of Ithaca with a crowd of "Suitors", whose aim is to persuade his mother Penelope to marry one of them, all the while eating up the wealth of Odysseus' household.

Persuaded by the goddess Athena Telemachus decides to go on a voyage to enquire after his father while the suitors plot to murder him on his return. Telemachus travels to Pylos and Sparta where he finds Menelaus and Helen (of Troy) who are now reconciled. He is well received but the news of his father are sketchy.

Meanwhile Odysseus, having spent seven years as captive lover to the nymph Calypso on her island, is set free at the order of Zeus and puts to sea on a raft. The sea god Poseidon, Odysseus' implacable enemy, raises a storm and wrecks the raft. Odysseus swims ashore on the island of the Phaeacians, where he is hospitably received after kneeling as supplicant to the King's daughter, Nausicaa. He conceals his identity until he is unable to hide his emotion when a blind singer retells the story of the Trojan Horse.

Odysseus then tells the his own adventures after Troy, most notably the episode of his encounter with the Cyclops Polyphemus. At first only intending to rob the giant's cave in his absence he gets captured and finally blinds him with a stake, thereby incurring the enmity of Poseidon, Polyphemus' father. Odysseus and his men flee to the island of the sorceress Circe who instructs him to visit the unterword to ask the spirit of the famous prophet Tiresias how best to return home. They then skirt the land of the Sirens, pass between Scylla and Charybdis, and land on another island, where in Odysseus' absence his hungry crew slay the cattle of the sun god Helios. In punishment all but Odysseus are drowned, he himself washes ashore on the island of Calypso.

Having listened raptly to the story the Phaeacians agree to help Odysseus get home. They deliver him at night to a hidden harbour on Ithaca. He finds his way to the hut of his faithful servant, the swineherd Eumaeus, who doesn't recognize him as Athena has disguised him as a wandering beggar. There he meets his son Telemachus who has himself returned and successfully evaded the suitor's ambush.

Father and son go separately to the house. Odysseus still in disguise is ill-treated by the suitors but stays his hand until, at Athena's prompting, Penelope maneuvers the suitors into competing for her hand in an archery competition using Odysseus' own bow. Since none of them are strong enough to string the bow he himself seizes it and turns it on the Suitors. Helped by Athena, Telemachus and two faithful servants, he kills them all.

There is a good English prose translation here, at project Gutenberg

About the Author
Homer

Most modern researchers place Homer in the 7th or 8th centuries BC while Herodotus estimates that he lived around 850 BC. Other ancient sources place him nearer to the supposed time of the Trojan War, in the early 12th century BC.

The Iliad and the Odyssey, attributed to Homer, lie at the beginning of the Western canon of literature. Most scholars agree that both epics underwent a process of standardisation and refinement out of older material beginning in the 8th century BC.

Despite many legends there is no historical proof that Homer was or was not a real person. Since nothing definite is known about the life of this Homer, the common joke—also recycled with regard to Shakespeare—has it that the epics "were not written by Homer, but by another man of the same name."

Independent of the question of original authorship is the agreement that the Homeric poems where handed down through the oral tradition of many singer-poets.