In the Garden of Beasts
by Erik Larson 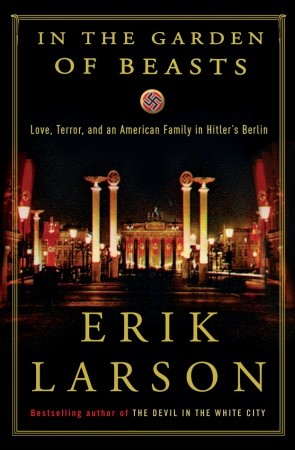 recounts the unique experience of the American Ambassador to Germany, William Dodd, during the years 1933 to 1937. Called from his position as professor of American history at the University of Chicago he came to Berlin in the year when Hitler rose to power. Dodd was sent there not to avert grave risks to the world but mainly on a platform to secure the repayment of German debts to American creditors. The new German government's persecution of the Jews was a cause for concern though not taken too seriously by an Amercan foreign service which Larson describes as 'a pretty good club' of rich and privileged Princeton graduates. Dodd was here the odd bird out, from a poor background, the professor with a conscience. Though he too - partial to Germany through his student years in Leipzig - was initially hopeful that the Nazi regime would grow more moderate with the experience of power. Upon their arrival in Berlin the Dodd family were even impressed by all the excitement of 'revolutionary' Germany. Especially Dodd's newly divorced daughter Martha became fascinated by all these 'wholesome and beautiful lads', singing to the 'noble ghost of Horst Wessel with shining eyes and unerring tongues' (Martha Dodd as cited by Larson). She threw herself into Berlin's colorful nightlife where the golden twenties seemed to continue for all those not hunted by the new regime. Martha had a series of liaisons, among them with Gestapo head Rudolf Diels and Soviet attaché and secret agent Boris Vinogradov, who recruited the apolitical young woman as a minor soviet spy. It is most of all through her eyes that Larson shows the contemporary milieu free of all the (rightful) prepossession that comes from the knowledge of what happened later. The Dodds in 1933 Berlin seem to have shared the simplicity of many in their assessment of the Nazis. It took the so-called 'Night of the Long Knives', the decimation of Ernst Röhm's SA by Hitler in June/July 1934, to arrive at a more sober assessment of the situation in Germany. William Dodd went on to steer a difficult course between the position of the Nazi's uncompromising critics - most notably Consul George Messersmith and correspondent Edgar Mowrer of the Chicago Daily News - and the expectations of officials back home at the state department who wished him to make nice with a murderous regime. It was these latter who complained repeatedly and in 1937 moved Roosevelt to recall Dodd from his post, replacing him with Hugh Wilson, a member of the 'pretty good club' who - praising Hitler as "the man who has pulled his people back from moral and economic despair into the state of pride ..." - remained on the post right until the beginning of the Second World War. William Dodd, having left the Foreign Service, went on to campaign against the Nazi regime in the United States.

'In the Garden of Beasts' is a meticulously researched account of this horrible and fascinating time. The book reads like a novel while exposing a contemporary attitude towards pre-war Nazi Germany that seems almost unimaginably naive and complacent from today's point of view.

About the Author
Erik Larson
Erik Larson (born January 3, 1954) is an American journalist and nonfiction author. In a 2003 interview he says about himself: "Maybe I don’t have a novelist’s sensibility, but what I do have is an ... ear and eye for the little stories that bring an era alive. The best way to convey those stories is in the world of non-fiction. Often the best stories of the past are so bizarre that they wouldn’t work as fiction."

The Devil in the White City