The Grapes of Wrath
by John Steinbeck 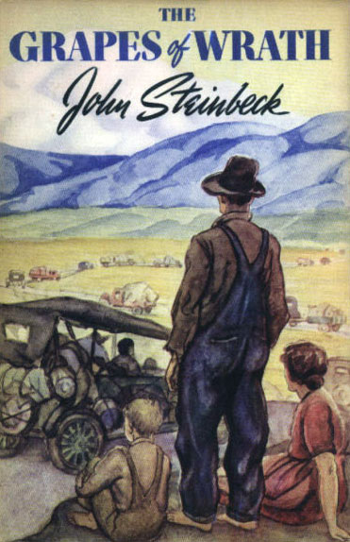 The Grapes of Wrath is an American realist novel written by John Steinbeck and published in 1939. The book won the National Book Award and Pulitzer Prize for fiction, and it was cited prominently when Steinbeck won the Nobel Prize in 1962.

Set during the Great Depression, the novel focuses on the Joads, a poor family of tenant farmers driven from their Oklahoma home by drought, economic hardship, agricultural industry changes and bank foreclosures forcing tenant farmers out of work. Due to their nearly hopeless situation, and in part because they were trapped in the Dust Bowl, the Joads set out for California. Along with thousands of other "Okies", they sought jobs, land, dignity, and a future.

Upon arrival, they find little hope of making a decent wage, as there is an oversupply of labor, a lack of laborers' rights, and the big corporate farmers are in collusion, while smaller farmers are suffering from collapsing prices.

Steinbeck grew up in California's Salinas Valley, a culturally diverse place with a rich migratory and immigrant history. This upbringing imparted a regionalist flavor to his writing, giving many of his works a distinct sense of place. Salinas, Monterey and parts of the San Joaquin Valley were the setting for many of his stories. The area is now sometimes referred to as "Steinbeck Country". Most of his early work dealt with subjects familiar to him from his formative years. An exception was his first novel, Cup of Gold, which concerns the pirate Henry Morgan, whose adventures had captured Steinbeck's imagination as a child.

In his subsequent novels, Steinbeck found a more authentic voice by drawing upon direct memories of his life in California. His childhood friend, Max Wagner, a brother of Jack Wagner and who later became a film actor, served as inspiration for The Red Pony. Later he used real American historical conditions and events in the first half of the 20th century, which he had experienced first-hand as a reporter. Steinbeck often populated his stories with struggling characters; his works examined the lives of the working class and migrant workers during the Dust Bowl and the Great Depression.

His later work reflected his wide range of interests, including marine biology, politics, religion, history and mythology. One of his last published works was Travels with Charley, a travelogue of a road trip he took in 1960 to rediscover America.

Many of Steinbeck's works are on required reading lists in American high schools. In the United Kingdom, Of Mice and Men is one of the key texts used by the examining body AQA for its English Literature GCSE. At the same time, The Grapes of Wrath has been banned by school boards. It was burned in Salinas on two different occasions. In 2003, a school board in Mississippi banned it on the grounds of profanity. Steinbeck was one of the ten most frequently banned authors from 1990 to 2004.