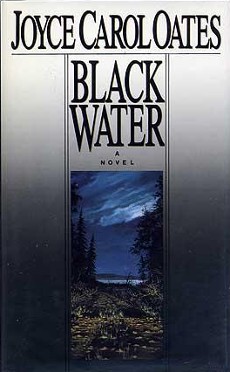 Kelly Kelleher is an idealistic, twenty-six-year-old “good girl” when she meets the Senator at a Fourth of July party on Grayling Island. During the party, the Senator captivates Kelly and the two of them leave together to catch the last ferry off the island. Yet something goes terribly wrong. The drunken senator misses the ferry road and ends up on a narrow and abandoned track. In the rush to catch the ferry, the rented car skids off the road and plunges into the deceptively deep Indian Creek. The car overturns in the water; The Senator escapes by scrambling over Kelly, who, pinned in the car with broken bones, slowly drowns. The Senator stumbles several miles to call his friend Ray Annick back at the party for help; the accident, he yells into the phone, was the girl’s fault. According to the The Pulitzer Prize Jury, “In 'Black Water,' Joyce Carol Oates accomplishes the difficult task of turning a recent tragedy in American history—one clouded by mystery—into drama that suggests the passions, fears, and moment-by-moment decisions that produced it. Clearly, this is her boldest novel, not because her characters will be compared to Senator Kennedy and Mary Jo Kopechne, but rather because she has given a compelling voice to the woman who is the victim in her story, and by doing so enriches—and puts a human face on—someone marginalized in our cultural imagination. Elegantly written and haunting, 'Black Water' is that rarest of novels: a fiction that goes beneath the historical record and newspaper headlines to unearth the truth of the human heart."
About the Author
Joyce Carol Oates
Born on June 16, 1938, in Lockport, New York, Joyce Carol Oates developed a love for writing as a child and went on to become an acclaimed, bestselling scribe known for her novels, stories, poetry and essays, winning the National Book Award for 1969's them. Her other notable works include A Garden of Earthly Delights, We Were the Mulvaneys, Blonde, The Gravedigger's Daughter and The Accursed.