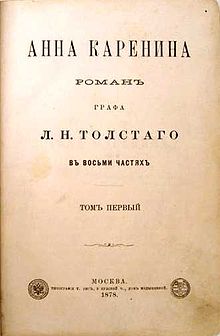 Anna Karenina was initially published in serial installments from 1873 to 1877. It first appeared as a complete book in 1878. Regarded as a pinnacle in realist fiction, Tolstoy himself considered Anna Karenina his first true novel. Fyodor Dostoyevsky declared it "flawless as a work of art." His opinion was shared by Vladimir Nabokov and by William Faulkner, who described the novel as, "the best ever written."

Anna Karenina is the tragic story of a married aristocrat and her affair with the affluent Count Vronsky. A bachelor, Vronsky is eager to marry her if she would agree to leave her husband Karenin, a government official, but she is vulnerable to the pressures of Russian social norms and her own insecurities. Although Vronsky and Anna go to Italy, where they can be together, they have trouble making friends. Back in Russia, she is shunned by society, becoming further isolated and anxious. Despite Vronsky's reassurances, she grows increasingly possessive and paranoid about his imagined infidelity. She throws herself in front of a train. Vronsky goes to war, not intending to survive.

About the Author
Leo Tolstoy
Count Lev Nikolayevich Tolstoy, born 9 September, died 20 November 1910, was a Russian writer, philosopher and political thinker. Tolstoy was a master of realistic fiction and is considered one of the greatest novelists of all time. He is best known for two long novels, War and Peace (1869) and Anna Karenina (1877). Tolstoy first achieved literary acclaim in his 20s with his semi-autobiographical trilogy of novels, Childhood, Boyhood, and Youth (1852–1856) and Sevastopol Sketches (1855), based on his experiences in the Crimean War. His last great novel, Resurrection, was first published in 1899, complete and uncensored not until 1936.