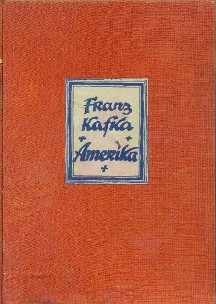 The novel is a fragment. The story describes the wanderings of sixteen-year-old European immigrant Karl Roßmann, who was forced to go to New York to escape the scandal of his seduction by a housemaid. As the ship arrives in the USA he becomes friends with a stoker who is about to be dismissed from his job. Karl decides to help him, together they go to see the captain who is at this very moment in a meeting with a Senator who turns out to be Karl's uncle. Karl does not know that this Senator Jacob is his uncle but Jacob recognizes him and takes him away.

Karl stays with his uncle for some time but is abandoned by him after making a visit to his uncle's friend without the uncle's approval. Wandering aimlessly, he becomes friends with two drifters named Robinson and Delamarche. They promise to find him a job but instead rob and humiliate him. Karl then gets a job at Hotel Occidental as a lift-boy. One day Robinson shows up drunk at the hotel asking Karl for money. Afraid of being seen talking to a 'friend', which is forbidden for lift-boys, Karl agrees to the request, then commits the worse offence of putting up a dead-drunk Robinson in the lift-boy dorm.

Dismissed for leaving his post, Karl goes with Robinson to Delamarche's place who is now staying with a wealthy and obese lady named Brunelda. She wants to take Karl in as her servant, Karl refuses, but Delamarche physically forces him to stay and he is imprisoned in the apartment. He tries to break out, but is beaten by Delamarche and Robinson. Later on the balcony he chats with a student who tells him that it is hard to find a job elsewhere. So he decides to stay.

One day he sees an advertisement for the 'Nature Theatre of Oklahoma', which promises to find employment for everyone. Karl gets engaged as a "technical worker." He is then sent to Oklahoma by train and fascinated by the landscape. He adopts the name "Negro" as his own.

About the Author
Franz Kafka
Franz Kafka was born in Prague to a Jewish family on 3 July 1883. He was traumatized by the relationship with his authoritarian father, a "huge, selfish, overbearing businessman" according to biographer Stanley Corngold. He studied law in Prague, finishing his studies with a doctorate degree in 1906. During his studies he first met Max Brod, his close friend and publisher of his literary work after his death. Kafka worked for two insurance companies, processing and investigating compensation claims and handling appeals until he was pensioned off in 1917 due to his tuberculosis. He died 3 June 1924 in a sanatorium near Vienna. Almost all of Kafkas writing was in German. He destroyed most of it durng his lifetime and left the rest to Max Brod with instructions for it to be destroyed unread. Brod decided to ignore this.