The Falling Sky
by Pippa Goldschmidt 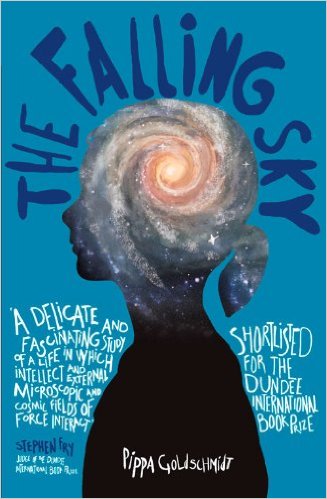 Jeanette is a young, solitary post-doctoral researcher who has dedicated her life to studying astronomy. Struggling to compete in a prestigious university department dominated by egos and incompetents, and caught in a cycle of brief and unsatisfying affairs, she travels to a mountain-top observatory in Chile to focus on her research.

There Jeanette stumbles upon evidence that will challenge the fundamentals of the universe, drawing her into conflict with her colleagues and the scientific establishment, but also casting her back to the tragic loss that defined her childhood. As the implications of her discovery gather momentum, and her relationships spiral out of control, Jeanette’s own grip on reality is threatened, finally forcing her to confront the hidden past.
About the Author
Pippa Goldschmidt
From her website:

I write in a variety of long and short forms; the short stories in my recent collection The Need for Better Regulation of Outer Space are all inspired by real, imaginary, and bizarre aspects of science. My novel The Falling Sky is about an astronomer who discovers the Universe and loses her mind.

I have a PhD in astronomy and worked as an astronomer for several years at Imperial College. I also have an MLitt in creative writing from University of Glasgow and I was a winner of a Scottish Book Trust/Creative Scotland New Writers Award for 2012.

I also write non-fiction: newspaper articles, book reviews and the occasional academic paper. I like talking about the links between science and literature on the radio and at live events; I’ve been on Radio 4 and appeared at many festivals including Wigtown Book Festival, Edinburgh International Book Festival, Aye Write!, Orkney International Science Festival and Edinburgh International Science Festival. I’ve run workshops at some of these events encouraging other writers to be inspired by science.