Odds Against Tomorrow
by Nathanial Rich 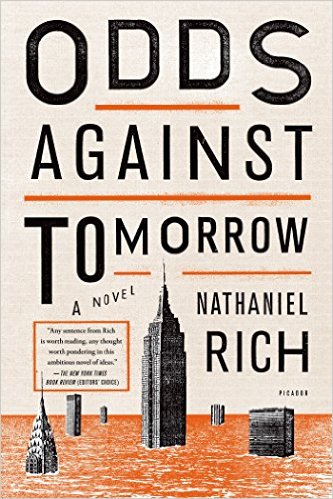 NEW YORK CITY, the near future: Mitchell Zukor, a gifted young mathematician, is hired by a mysterious new financial consulting firm, FutureWorld. The business operates out of a cavernous office in the Empire State Building; Mitchell is employee number two. He is asked to calculate worst-case scenarios in the most intricate detail, and his schemes are sold to corporations to indemnify them against any future disasters. This is the cutting edge of corporate irresponsibility, and business is booming. As Mitchell immerses himself in the mathematics of catastrophe--ecological collapse, global war, natural disasters--he becomes obsessed by a culture's fears. Yet he also loses touch with his last connection to reality: Elsa Bruner, a friend with her own apocalyptic secret, who has started a commune in Maine. Then, just as Mitchell's predictions reach a nightmarish crescendo, an actual worst-case scenario overtakes Manhattan. Mitchell realizes he is uniquely prepared to profit. But at what cost? At once an all-too-plausible literary thriller, an unexpected love story, and a philosophically searching inquiry into the nature of fear, Nathaniel Rich's Odds Against Tomorrow poses the ultimate questions of imagination and civilization. The future is not quite what it used to be.
About the Author
Nathanial Rich
Nathaniel Rich (born March 5, 1980) is an American novelist and essayist. He is the author of the 2013 novel, Odds Against Tomorrow, the 2008 novel, The Mayor's Tongue and the 2005 nonfiction book, San Francisco Noir: The City in Film Noir from 1940 to the Present. Rich has written essays and criticism for The New York Review of Books, Vanity Fair, The New York Times Magazine, Harper's Magazine, Rolling Stone, and Slate.

Rich is an alumnus of Yale University, where he studied literature. After graduation he worked on the editorial staff of The New York Review of Books. He moved to San Francisco to write San Francisco Noir, which the San Francisco Chronicle named one of the best books of 2005.[9] That year he was hired as an editor by The Paris Review.

The Mayor's Tongue was described by Carolyn See in The Washington Post as a "playful, highly intellectual novel about serious subjects -- the failure of language, for one, and how we cope with that failure in order to keep ourselves sane."

NPR's Alan Cheuse called Odds Against Tomorrow a "brilliantly conceived and extremely well-executed novel...a knockout of a book." Cathleen Schine wrote, in the New York Review of Books, "Let's just, right away, recognize how prescient this charming, terrifying, comic novel of apocalyptic manners is...Rich is a gifted caricaturist and a gifted apocalyptist. His descriptions of the vagaries of both nature and human nature are stark, fresh, and convincing, full of surprise and recognition as both good comedy and good terror must be."