All the Light We Cannot See: A Novel
by Anthony Doerr 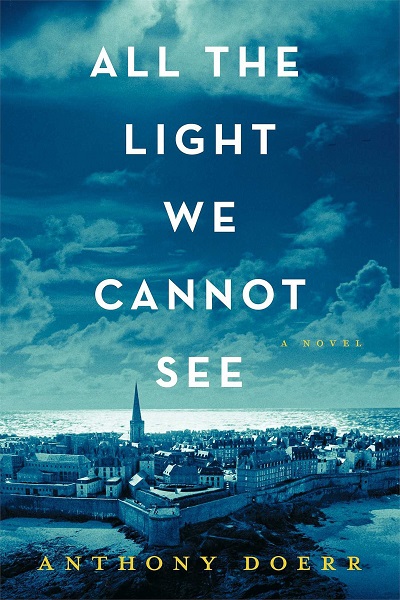 All the Light We Cannot See is a novel written by American author Anthony Doerr, published by Scribner on May 6, 2014. It won the 2015 Pulitzer Prize for Fiction and the 2015 Andrew Carnegie Medal for Excellence in Fiction.
Set in occupied France during World War II, the novel centers on a blind French girl and a German boy whose paths eventually cross.

In 1934, Marie-Laure LeBlanc is the daughter of a widowed master locksmith at the Museum of Natural History in Paris whom she often accompanies to work. Marie suffered from rapidly deteriorating eyesight before becoming fully blind due to cataracts at the age of 6. Her father promises that he will always be there for her and creates a wooden scale-model of their neighborhood in Paris for her to memorize by touch so that she is able to navigate by herself. He also keeps her mind sharp by hiding birthday gifts in intricate puzzle boxes that he carves. Marie learns to read Braille and her father gives her new novels in Braille to read. She becomes entranced by the imagined worlds like those that she explores in her edition of Jules Verne’s Twenty Thousand Leagues Under the Sea.

Doerr writes a column on science books for the Boston Globe and is a contributor to The Morning News, an online magazine. He is married, has twin sons and lives in Boise, Idaho.