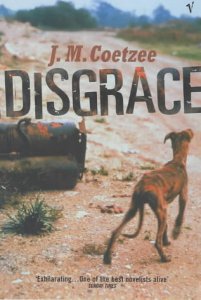 Disgrace is a South African novel by J. M. Coetzee first published in 1999. It won the Booker Prize.

David Lurie is a South African professor of English who loses everything: his reputation, his job, his peace of mind, his good looks, his dreams of artistic success, and finally even his ability to protect his own daughter. He is twice-divorced and dissatisfied with his job as a communications lecturer, teaching one specialized class in romantic literature at a technical university in Cape Town in post-apartheid South Africa. His "disgrace" comes when he seduces one of his students and then does nothing to protect himself from the consequences. Lurie is working on Lord Byron at the time of his disgrace, and "the irony is that he comes to grief from an escapade that Byron would have thought distinctly timid."

He is dismissed from his teaching position, after which he takes refuge on his daughter's farm in the Eastern Cape. For a time, his daughter's influence and natural rhythms of the farm promise to harmonise his discordant life. But the balance of power in the country is shifting. Shortly after becoming comfortable with rural life, he is forced to come to terms with the aftermath of an attack on the farm in which his daughter is raped and impregnated and he is violently assaulted.

About the Author
J.M. Coetzee

John Maxwell Coetzee, born 1940, received the Nobel Prize for Literature in 2003. The reality of South Africa appears repeatedly in Coetzee’s work. He has said that apartheid values and behavior could arise anywhere. According to the Nobel Comittee his novels focus on the cruel rationalism and cosmetic morality of western civilization while capturing man's divine spark in moments of defeat and weakness. Coetzee venerates Franz Kafka and Samuel Beckett as literary examples.

Waiting for the Barbarians