A Brief History of Seven Killings
by Marlon James 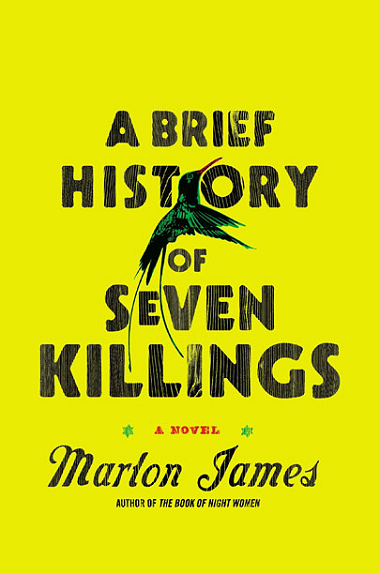 The novel spans several decades and explores the attempted assassination of Bob Marley in Jamaica in 1976 and its aftermath through the crack wars in New York City in the 1980s and a changed Jamaica in the 1990s.

The novel has five sections, each named after a musical track and covering the events of a single day: The first part of the novel is set in Kingston, Jamaica, in the build-up to the Smile Jamaica Concert and describes politically motivated violence between gangs associated with the Jamaica Labour Party (JLP) and the People's National Party (PNP).
About the Author
Marlon James

(born 24 November 1970) is a Jamaican writer. He has taught literature and creative writing at Malcalester College in St. Paul, Minnesota since 2007. His first novel, John Crow's Devil, tells the story of a biblical struggle in a remote Jamaican village in 1957. His second novel, The Book of Night Women, is about a slave woman's revolt in a Jamaican plantation in the early 19th century. His 2014 novel, A Brief History of Seven Killings, explores the history of Jamaican political instability between 1976 and 1991, it won the Man Booker Prize in 2015. James' fourth book, ‘Black Leopard, Red Wolf’, is a Fantasy novel, the first book in a planned trilogy series.