Far From the Madding Crowd
by Thomas Hardy 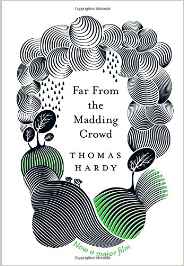 Far from the Madding Crowd (1874) is Thomas Hardy's fourth novel and his first major literary success. It originally appeared anonymously as a monthly serial in Cornhill Magazine, where it gained a wide readership.

The novel is the first to be set in Hardy's fictional county of Wessex in rural south west England. It deals in themes of love, honour and betrayal, against a backdrop of the seemingly idyllic, but often harsh, realities of a farming community in Victorian England. It describes the farmer Bathsheba Everdene, her life and relationships - especially with her lonely neighbour William Boldwood, the faithful shepherd Gabriel Oak, and the thriftless soldier Sergeant Troy. On publication, critical notices were plentiful and mostly positive. Hardy revised the text extensively for the 1895 edition and made further changes for the 1901 edition.

The novel was listed at number 48 on the BBC's survey The Big Read in 2003. The book finished 10th on the Guardian's list of greatest love stories of all time in 2007.

The novel has been dramatised several times, notably in an Oscar-nominated 1967 film directed by John Schlesinger.


About the Author
Thomas Hardy
Thomas Hardy, OM (2 June 1840 – 11 January 1928) was an English novelist and poet. A Victorian realist in the tradition of George Eliot, he was influenced both in his novels and in his poetry by Romanticism, especially William Wordsworth. Charles Dickens was another important influence.Like Dickens, he was highly critical of much in Victorian society, though Hardy focused more on a declining rural society.

While Hardy wrote poetry throughout his life and regarded himself primarily as a poet, his first collection was not published until 1898. Initially, therefore, he gained fame as the author of novels, including Far from the Madding Crowd (1874), The Mayor of Casterbridge (1886), Tess of the d'Urbervilles (1891), and Jude the Obscure (1895). Hardy's poetry, though prolific, was not as well received during his lifetime. It was rediscovered in the 1950s, when Hardy's poetry had a significant influence on the Movement poets of the 1950s and 1960s, including Philip Larkin.

Most of his fictional works – initially published as serials in magazines – were set in the semi-fictional region of Wessex. They explored tragic characters struggling against their passions and social circumstances. Hardy's Wessex is based on the medieval Anglo-Saxon kingdom and eventually came to include the counties of Dorset, Wiltshire, Somerset, Devon, Hampshire and much of Berkshire, in southwest and south central England.