Hand Me Down World
by Lloyd Jones 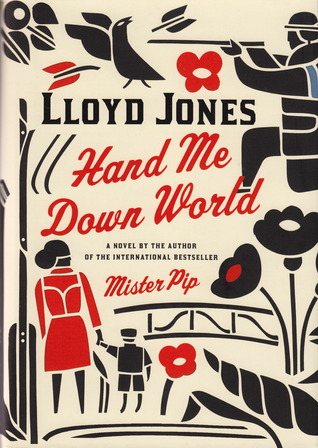 A hotel employee meets a black man from Germany who says: "Trust me". She gives him a child which he steals. Next thing she is a 'migrant' on her way to Berlin, Germany, seen by people on her way who see themselves, not her. She remains invisible: a black woman who makes her bed neatly in the morning.

When over half of the book has been read, years have gone by. She has been to Berlin, she has seen her son. Now Ines is imprisoned in Catania, Sicily. Her name is the name of a woman she is said to have killed to take her identity.

About the Author
Lloyd Jones
(born in Lower Hutt, 23 March 1955) is a New Zealand author who currently resides in Wellington. His novel Mister Pip won the Commonwealth Writers' Prize and was shortlisted for the Booker.

In 1988 Jones was the recipient of the Katherine Mansfield Memorial Fellowship. In 1994 he curated an exhibition which illustrated the New Zealand Saturday. The work was a collaboration with photographer Bruce Foster and held at the National Library in Wellington. The work was published as The Last Saturday and included historical photographs, contemporary photographs by Foster and an essay by Jones.

In May 2003, a theatrical adaptation of Jones' novel The Book of Fame was presented at Wellington's Downstage Theatre.

In May 2007, Jones won the Commonwealth Writers' Prize for Overall Best Book Award for his novel Mister Pip. The novel is set during the Bougainville Civil War of the early 1990s in Papua New Guinea. The book was also short-listed for the Man Booker Prize in 2007.

Jones was the 2007 recipient of the Creative New Zealand Berlin Writers' Residency.