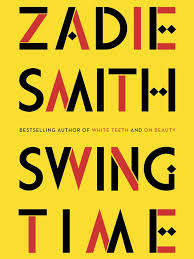 Two girls, 7 years old, grow up on a London housing estate. Both are mixed race, 'brown' of the same shade, brown meaning not knowing where they belong. By the same logic the same shade of brown means that they belong to one another. As it turns out one of them, the narrator, becomes assistant to a white pop star, Aimee, in a slave-like relationship. While the other, Tracey, a great dancer, fails in her career, sinking finally into a psychopathic state where she harasses the narrator's sick mother, a proud black woman, who had been looking down on Tracey back in the day when she was the narrator's childhood best friend ...

The novel was first published in November 2016.

About the Author
Zadie Smith

Zadie Smith (born on 25 October 1975) is a British novelist, essayist and short story writer. As of 2016, she has published five novels, all of which have received substantial critical praise. In 2003, she was included on Granta's list of 20 best young authors. Smith has won the Orange Prize for Fiction in 2006 and her novel White Teeth was included in Time magazines TIME 100 Best English-language Novels from 1923 to 2005 list. She joined New York University's Creative Writing Program as a tenured professor in 2010.