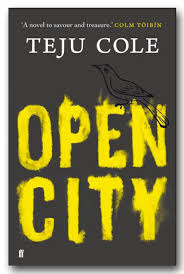 A haunting novel about identity, dislocation, and history, Teju Cole’s Open City is a profound work by an important new author who has much to say about our country and our world.

Along the streets of Manhattan, a young Nigerian doctor named Julius wanders, reflecting on his relationships, his recent breakup with his girlfriend, his present, his past. He encounters people from different cultures and classes who will provide insight on his journey—which takes him to Brussels, to the Nigeria of his youth, and into the most unrecognizable facets of his own soul.
About the Author
Teju Cole
was born in Kalamazoo, Michigan to Nigerian parents, and is the oldest of four children. Cole and his mother returned to Lagos, Nigeria shortly after his birth, where his father joined them after receiving his MBA from Western Michigan University. Cole moved back to the United States at the age of 17 to attend Western Michigan University for one year, then transferred to Kalamazoo College, where he received his bachelor's degree in 1996. After dropping out of medical school at the University of Michigan, Cole enrolled in an African art history program at the University of London, then pursued a doctorate in art history at Columbia University.

Every Day is for the Thief