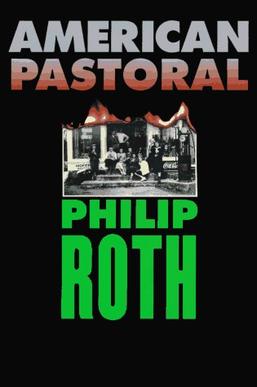 American Pastoral was first published in 1997 and won the 1998 Pulitzer Prize for Fiction. It is the first volume of Roth's so-called second Zuckerman trilogy and focuses on the life of virtuous Newark star athlete Seymour 'Swede' Levov, and the tragedy that befalls him when Levov's teenage daughter becomes a domestic terrorist during the late 1960s. The book is narrated by Levov's former schoolmate Nathan Zuckerman

Levov takes over his father's glove factory and marries Dawn Dwyer, a former beauty queen whom he met in college. He establishes what he believes to be a perfect American life with a beloved wife and daughter, a satisfying business career, and a magnificent house in the idyllic hamlet of Old Rimrock. Yet, as the Vietnam War and racial unrest rack the country and destroy inner-city Newark, his precocious teenage daughter Meredith ("Merry"), beset by an emotionally debilitating stutter and outraged by the war, becomes increasingly radical in her beliefs. In February 1968, Merry plants a bomb in the Old Rimrock post office, which kills a bystander; she goes into permanent hiding. Seymour finds Merry five years later, living in deplorable conditions in inner-city Newark. During this reunion, Merry reveals that she was responsible for several more bombings, killing three more people. Though Merry informs him that her actions were deliberate, Seymour decides to keep their meeting a secret, believing Merry has been manipulated by an unknown political group and a mysterious woman named Rita Cohen.

At a dinner party, Seymour discovers that his wife Dawn has been having an affair with Princeton-educated architect William Orcutt III, for whom she undergoes a facelift. Seymour then realizes that his wife is planning to leave him for Orcutt. It is revealed that Seymour himself previously had a short-term affair with Merry's speech therapist, Sheila Salzman, and that she and her husband Shelly hid Merry in their home after the post office bombing. Seymour sadly concludes that everyone he knows may have a veneer of respectability, but each engages in subversive behavior and that he cannot understand the truth about anyone based upon the conduct they outwardly display. He can no longer ignore the truth about the chaos and discord rumbling beneath the "American pastoral".

The 2016 movie of the same name, directed by and starring Ewan McGregor, is an adptation of the novel.

About the Author
Philip Roth
(March 19, 1933 – May 22, 2018) was an American novelist. He gained fame with the 1959 novella Goodbye, Columbus, an irreverent and humorous portrait of Jewish-American life that earned him a National Book Award. In 1969 he became a major celebrity with the publication of the controversial Portnoy's Complaint, the humorous and sexually explicit psychoanalytical monologue of "a lust-ridden, mother-addicted young Jewish bachelor," filled with "intimate, shameful detail, and coarse, abusive language."

Roth's books were twice awarded the National Book Award, twice the National Book Critics Circle award, and three times the PEN/Faulkner Award. He received a Pulitzer Prize for his 1997 novel, American Pastoral, which featured his best-known character, Nathan Zuckerman, the subject/narrator of many other of Roth's novels. His 2001 novel The Human Stain, another Zuckerman novel, was awarded the United Kingdom's WH Smith Literary Award for the best book of the year. His fiction, set frequently in Newark, New Jersey, is known for its intensely autobiographical character, for philosophically and formally blurring the distinction between reality and fiction, for its "supple, ingenious style," and for its provocative explorations of Jewish and American identity.