Goodbye to Berlin
by Christopher Isherwood 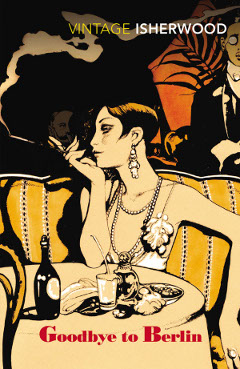 Goodbye to Berlin is a 1939 short novel by Christopher Isherwood set in pre-Nazi Germany. It is often published together with Mr Norris Changes Trains in a collection called The Berlin Stories.

The novel, a semiautobiographical account of Isherwood's time in 1930s Berlin, describes pre-Nazi Germany and the people he met. It is episodic, dealing with a large cast over a period of several years from late 1930 to early 1933. It is written as a connected series of six short stories and novellas. These are: "A Berlin Diary (Autumn 1930)," "Sally Bowles," "On Ruegen Island (Summer 1931)," "The Nowaks," "The Landauers," and "A Berlin Diary (Winter 1932-3)."

Moving to Germany to work on his novel, Isherwood soon becomes involved with a diverse array of German citizens: the caring landlady, Frl. Schroeder; the "divinely decadent" Sally Bowles, a young Englishwoman who sings in the local cabaret and her coterie of admirers; Natalia Landauer, the rich, Jewish heiress of a prosperous family business; Peter and Otto, a gay couple struggling to accept their relationship and sexuality in light of the rise of the Nazis.

The book, first published in 1939, highlights the groups of people who would be most at risk from Nazi intimidation. It was described by contemporary writer George Orwell as "Brilliant sketches of a society in decay." In his autobiography Without Stopping, the author and composer Paul Bowles suggests that Isherwood, whom he met in Berlin, may have borrowed his surname for the character Sally Bowles. Isherwood confirms this in his 1976 memoir Christopher and His Kind, writing, " liked the sound of it and also the looks of its owner,"

The novel was adapted into a Broadway play called I Am a Camera by John Van Druten (1951). It was a personal success for Julie Harris as the insouciant Sally Bowles, winning her the first of her five Tony Awards for Best Leading Actress in a play, although it earned the infamous review by Walter Kerr, "Me no Leica." The title is a quote taken from the novel's first page ("I am a camera with its shutter open, quite passive, recording, not thinking."). The play was then adapted into a less successful film, also called I Am a Camera (1955), with Laurence Harvey, Shelley Winters and Julie Harris, with screenplay by John Collier and music by Malcolm Arnold.

The book was then adapted into the Tony Award-winning musical Cabaret (1966) and the film Cabaret (1972) for which Liza Minnelli won an Academy Award for playing Sally.