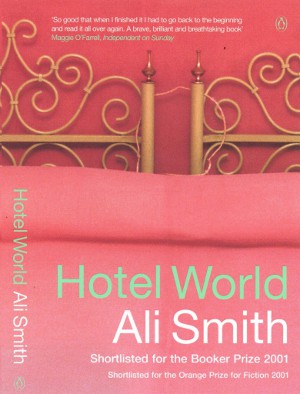 Hotel World is a postmodern novel with influences from modernist novel written by Ali Smith portraying the stages of grief in relation to the passage of time. It won both the Scottish Arts Council Book Award (2001) and the Encore Award (2002).

There are five characters, two relatives, three strangers, but all female. There is a homeless woman, a hotel receptionist, a hotel critic, the ghost of a hotel chambermaid, and the ghost’s sister. These women tell a story. And it is through this story that unbeknown to them their lives and fate intersect, the catalyst to their story: the Global Hotel.