How to be Good
by Nick Hornby 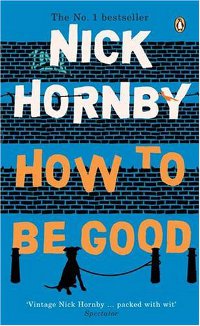 How to Be Good is a 2001 novel by English writer Nick Hornby. It centers on characters Katie Carr, a doctor, and her husband, David Grant. Events take a turn when David stops being "The Angriest Man In Holloway" and begins to be "good" with the help of his spiritual healer, DJ GoodNews (who also shows up briefly in Hornby's A Long Way Down).

The duo go about this by nominally convincing people to give their spare bedrooms to the homeless, but as their next scheme comes around, "reversal" (being good to people one has been not good to in the past), this proves to be fruitless and thus David gives up his strivings and his plans for a book on how to be good, appropriately named "How to be Good."

The novel has a funny side, mostly due to the conversion of the husband, David, from an angry, cynical and negative man to a "do-gooder." Nevertheless, its most important subject is the crisis that the couple is going through.

The protagonist, Katie, briefly encounters a minor character named Dick whose description and attitude towards music are reminiscent of the character of the same name from Hornby's first novel, High Fidelity.

A long way down