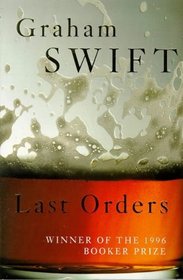 Last Orders is a 1996 Booker Prize-winning novel by British author Graham Swift. In 2001 it was adapted for the film Last Orders by Australian writer and director Fred Schepisi.

The story makes much use of flashbacks to tell the convoluted story of the relationships between a group of war veterans who live in the same corner of London, the backbone of the story being the journey of the group to Margate to scatter the ashes of Jack Dodds into the sea, in accord with his last wishes. The title 'Last Orders' not only refers to these instructions as stipulated in Jack Dodd's will, but also alludes to the 'last orders (of the day)' - the last round of drinks to be ordered before a pub closes, as drinking was a favourite pastime of Jack and the other characters.

The plot and style are influenced by William Faulkner's As I Lay Dying.
About the Author
Graham Swift
Graham Colin Swift was born in London, England, on 4 May 1949. He was educated at Dulwich College, London, Queens' College, Cambridge, and later the University of York.

Some of Swift's books have been filmed, including Last Orders,and Waterland. Last Orders was joint-winner of the 1996 James Tait Black Memorial Prize for fiction and a mildly controversial winner of the 1996 Booker Prize, owing to the superficial similarities in plot to William Faulkner's As I Lay Dying. Waterland is set in The Fens; a novel of landscape, history and family, it is often cited as one of the outstanding post-war British novels and has been a set text on the English literature syllabus in British schools.