Mario and the Magician
by Thomas Mann 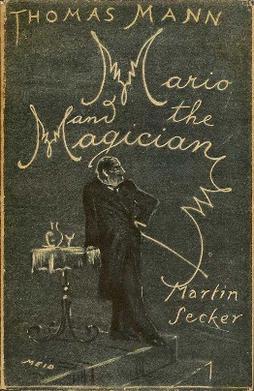 was first published in 1930. The novella is a parable on the power of the demagogue before the background of rising fascism at the time of publication.

The narrator describes a trip by his family to the fictional seaside town of Torre di Venere, Italy (a fictional town based on the touristic city of Forte dei Marmi). It becomes unpleasant, partly because he finds the Italian people to be too nationalistic. The family attends a performance by a magician and hypnotist named Cipolla, who uses his mental powers in a fascist way to control his audience. Cipolla represents the mesmerizing power of authoritarian leaders in Europe at the time — he is autocratic, misuses power, and is able to subjugate the crowd, counterbalancing his inferiority complex by artificially boosting his self-confidence. Cipolla's assassination by Mario, a native of Torre di Venere, is not a tragedy but a liberation for the audience.

About the Author
Thomas Mann

(6 June 1875 – 12 August 1955) was a German novelist, short story writer, social critic, philanthropist, essayist, and the 1929 Nobel Prize in Literature laureate. His highly symbolic and ironic epic novels and novellas are noted for their insight into the psychology of the artist and the intellectual. His analysis and critique of the European and German soul used modernized versions of German and Biblical stories, as well as the ideas of Johann Wolfgang von Goethe, Friedrich Nietzsche, and Arthur Schopenhauer.

Mann emigrated to Switzerland in 1933 and to the USA in 1939. From October 1940 onwards his monthly speeches condemning the Nazis were broadcast by the BBC in German. Mann returned to Europe in 1952 and lived in Switzerland until his death.