The Chosen
by Chaim Potok 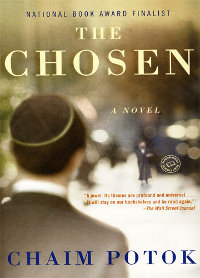 The Chosen is a novel written by Chaim Potok. It was first published in 1967. It follows the main character Reuven Malter and his friend Daniel Saunders, as they grow up in the Williamsburg neighborhood in Brooklyn, New York, in the 1940s. A sequel featuring Reuven's young adult years is titled The Promise which was published in 1969.

The Chosen is set in the mid-Twentieth Century, in Williamsburg, Brooklyn, New York City. The story takes place over a period of six years, beginning in 1944 when the protagonists are fifteen years old. It is set against the backdrop of the historical events of the time: the death of President Roosevelt, the end of World War II, the revelation of the Holocaust in Europe, and the struggle for the creation of the state of Israel.