The heart is a lonely hunter
by Carson McCuller 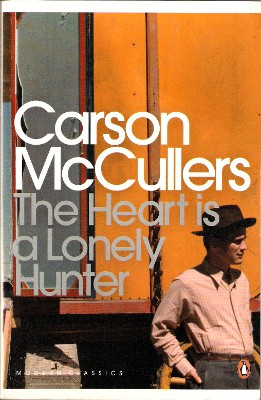 The Heart Is a Lonely Hunter is the debut 1940 novel by American author Carson McCullers. Written in Charlotte, North Carolina, in houses on Central Avenue and East Boulevard, it is about a deaf man named John Singer and the people he encounters in a 1930s mill town in the US state of Georgia. It created a literary sensation on publication, enjoying a meteoric rise to the top of the bestseller lists in 1940 and was the first in a string of works by McCullers to give voice to the rejected, forgotten, mistreated and oppressed. The novel was chosen as a selection for Oprah's Book Club in 2004.

The struggles of four of John Singer's acquaintances make up the majority of the narrative. They are: Mick Kelly, a tomboyish young girl who loves music and dreams of buying a piano; Jake Blount, an alcoholic labor agitator; Biff Brannon, the observant owner of a diner; and Dr. Benedict Copeland, an idealistic African American doctor.