The Dying Animal
by Philip Roth 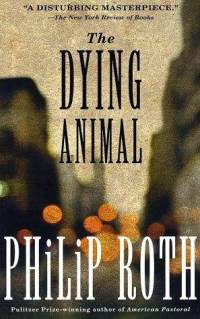 The Dying Animal (2001) is a short novel by the US writer Philip Roth. It tells the story of senior literature professor David Kepesh, renowned for his literature-themed radio show. Kepesh is finally destroyed by his inability to comprehend emotional commitment. The Dying Animal is the third book in a series portraying the life of the fictional professor, preceded by The Breast (1972) and The Professor of Desire (1977).

Kepesh is fascinated by the beautiful young Consuela Castillo, a student in one of his courses. An erotic liaison is formed between the two; Kepesh becomes obsessively enamored of his lover's breasts, a fetish developed in the previous novels. Despite his fevered devotion to Consuela, the sexually promiscuous professor maintains a concurrent affair with a previous lover, now divorced. He is also reluctant to expose himself to the scrutiny or ridicule that might follow from an introduction to Consuela's family. It is implied that he fears such a meeting would expose the implausible age gap in their relationship. Ultimately, Kepesh limits their relationship to the physical instead of embarking upon any deeper arrangement.

In the end, Kepesh is destroyed by his indecisiveness, the fear of senescence, his lust and jealousy. Consuela never subsequently finds a lover who can show the same level of devotion to her body as Kepesh had. After some years of estrangement, she asks him to take nude photographs of her because she will be losing one of her breasts to a life-saving mastectomy.
Most editions display a cover picture, Le grand nu (1919) by Amedeo Modigliani. In the novel, Consuela sends Kepesh a postcard depicting Le grand nu, and Kepesh surmises that the figure in the painting is her alter ego.

About the Author
Philip Roth
(March 19, 1933 – May 22, 2018) was an American novelist. He gained fame with the 1959 novella Goodbye, Columbus, an irreverent and humorous portrait of Jewish-American life that earned him a National Book Award. In 1969 he became a major celebrity with the publication of the controversial Portnoy's Complaint, the humorous and sexually explicit psychoanalytical monologue of "a lust-ridden, mother-addicted young Jewish bachelor," filled with "intimate, shameful detail, and coarse, abusive language."

Roth's books were twice awarded the National Book Award, twice the National Book Critics Circle award, and three times the PEN/Faulkner Award. He received a Pulitzer Prize for his 1997 novel, American Pastoral, which featured his best-known character, Nathan Zuckerman, the subject/narrator of many other of Roth's novels. His 2001 novel The Human Stain, another Zuckerman novel, was awarded the United Kingdom's WH Smith Literary Award for the best book of the year. His fiction, set frequently in Newark, New Jersey, is known for its intensely autobiographical character, for philosophically and formally blurring the distinction between reality and fiction, for its "supple, ingenious style," and for its provocative explorations of Jewish and American identity.