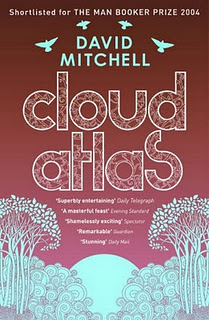 Cloud Atlas is a 2004 novel, the third book by British author David Mitchell. It won the British Book Awards Literary Fiction Award and the Richard & Judy Book of the Year award, and was short-listed for the 2004 Booker Prize, Nebula Award, Arthur C. Clarke Award, and other awards.

The novel consists of six nested stories that take the reader from the remote South Pacific in the nineteenth century to a distant, post-apocalyptic future. Each tale is revealed to be a story that is read (or watched) by the main character in the next. All stories but the last one get interrupted at some moment, and after the sixth story concludes at the center of the book, the novel "goes back" in time, "closing" each story as the book progresses in terms of pages but regresses in terms of the historical period in which the action takes place. Eventually, readers end where they started, with Adam Ewing in the Pacific Ocean, circa 1850.

About the Author
David Mitchell
was born in Southport, Merseyside, in England, raised in Malvern, Worcestershire, and educated at the University of Kent, studying for a degree in English and American Literature followed by an M.A. in Comparative Literature. He lived for a year in Sicily, then moved to Hiroshima, Japan, where he taught English to technical students for eight years, before returning to England, where he could live on his earnings as a writer and support his pregnant wife. After another stint in Japan, he currently lives in Clonakilty, Ireland, with his wife Keiko and their two children. In an essay for Random House, Mitchell wrote: "I knew I wanted to be a writer since I was a kid, but until I came to Japan to live in 1994 I was too easily distracted to do much about it. I would probably have become a writer wherever I lived, but would I have become the same writer if I'd spent the last 6 years in London, or Cape Town, or Moose Jaw, on an oil rig or in the circus? This is my answer to myself."

Mitchell's first novel, Ghostwritten (1999), moves around the globe, from Okinawa to Mongolia to pre-Millennial New York City, as nine narrators tell stories that interlock and intersect. The novel won the John Llewellyn Rhys Prize (for best work of British literature written by an author under 35) and was shortlisted for the Guardian First Book Award. His two subsequent novels, number9dream (2001) and Cloud Atlas (2004), were both shortlisted for the Man Booker Prize. In 2003, he was selected as one of Granta’s Best of Young British Novelists. In 2007, Mitchell was listed among Time magazine's 100 Most Influential People in The World. Mitchell's American editor at Random House is novelist David Ebershoff.

Mitchell has the speech disorder of stammering and considers the film The King's Speech (2010) to be one of the most accurate portrayals of what it's like to be a stammerer: "I’d probably still be avoiding the subject today had I not outed myself by writing a semi-autobiographical novel, Black Swan Green, narrated by a stammering 13 year old." Mitchell is also a patron of the British Stammering Association.